Last night I was sitting in The Chair putting Zen to sleep. He was nearly there. The 3 elder kids were in their bedroom, supposedly going to sleep. Suddenly I heard yelling, a loud crash, and the worst scream known to mankind. The kind of scream that makes you want to vomit. One of the kids was hurt. Badly. Mark went running. I looked down at the sweet, closed eyes of Zen and in that half a second I made the decision to join Mark. He is more than capable, a very hands on daddy, but one of my kids was hurt. I needed to be with whomever it was. I jumped up while Zen continued to nurse, his eyes fluttering. Mark yelled, “GET ICE!!” I fumbled with it twice before getting it to the bedroom. I passed a pacing Bug and saw C-dog on the floor, writhing is pain. I have no clue where Elf was. I know she was there but once I saw the hurt child I saw nothing else.

Apparently C-dog thought it would be a brilliant idea to jump off the bed in order to catch the balloon. The balloon. It is Zen’s. Mark bought it for him for the early celebration of his upcoming first birthday. I have been after Princess and C-Dog all week long to just leave it alone. It isn’t theirs to play with. They struggle with self-control though and on top of it C-dog it impetuous to the max. If anyone reading this has a Sensory or Spectrum kid you can totally relate to this. 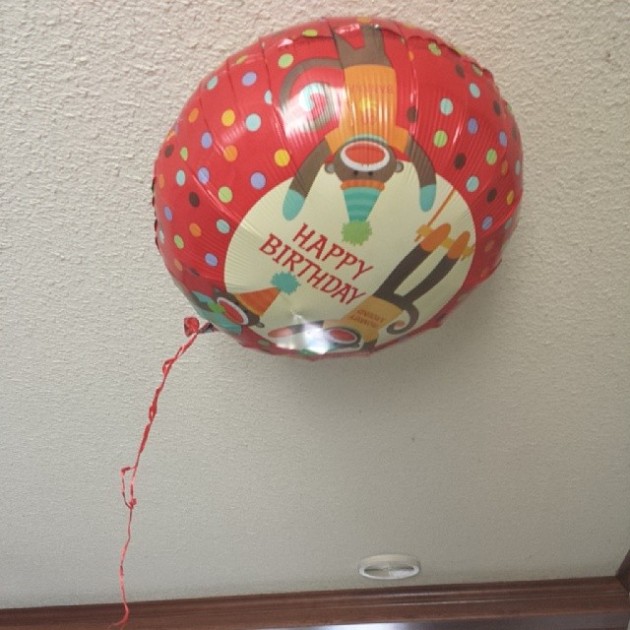 Zen was fully awake now. It is going to take forever to get him back to sleep but I need to focus on one issue at a time and the hurt child obviously comes first.

After a quick assessment Mark gathered C-dog into his arms and headed out to the local Emergency Department. I was left to get the others calmed and asleep. Bug and Elf were no problem. They went to bed and fell asleep. Bless them. ❤ Princess laid on the couch waiting for me to “nuggle” her. She fell asleep waiting. 😦 I will have to give her extra cuddles tonight.

Zen and I trekked through the uncharted waters of “I am tired. I want to sleep. I want Mommy to hold me. I do not want to nurse anymore, but I have no clue how to fall asleep in her arms without nursing.” Usually I have Mark put Zen to sleep when he doesn’t want to nurse. We managed and Zen succumbed and drifted off into dreamland. Whew. One less worry….

Mark reported to me that when the doctor asked C-Dog what happened he said “I foolishly jumped off the top bunk.” Well, that is something at least! He realizes what he did was foolish! He doesn’t always realize this even when he gets hurt. I just hope this lesson doesn’t get lost and forgotten.

The doctor claims “It is not broken.” C-Dog slept on the couch just fine but woke in pain and has been complaining all day long. He can’t put any pressure on his foot. He needs help getting around. My instinct tells me I need to consider getting a second opinion. Bah.

UPDATE: After a full day of not being able to put any weight onto his foot I decided that I had to bring him somewhere else. I brought him to the local orthopedic urgent care this morning. Of course this was after I got lost in discussion with him as we were driving the 30+ minutes it takes to get to this place and missed my exit resulting in a nice side trip to the state south of us (we live near the boarder). Anyway, the new place took X-rays from different angles and C-Dog fractured one of the growth plates in his foot. 😦 He is more sore after all the handling he had to endure. He has a boot-cast and a walker. He isn’t to put any weight on the foot for several days and then he can with aid of the walker. Eventually he will wean off the walker and just get around with the boot. His next follow up is in 10 days to see how it is healing.