Have you ever watched Big Bang Theory? If not, WHY????? Do you know who Sheldon is? If not. WHY?????
Seriously, if you haven’t seen it go watch Season 1 real quick and then come back and finish reading my post.

This is the kid who tries so hard to understand and participate in sarcasm, but last therapy session admitted that he usually has no idea what is going on. He is literal. Period.

This kid knows the name of every single Star Wars Clone Trooper (even the ones with numbers instead of names) and if and how they died. One car ride he sat there rattling them off for 30 minutes before I finally said “Honey, I have no idea what you are talking about.” he continued rattling them off, but at a faster pace, until he was done.

Why am I telling you this? Well, it is Halloween and that means the kids will dress up and go door to door and ask for candy. The 13 year old will wear the same costume he wore the last 4 years, a Hershey Bar. And despite my best efforts to get his to say “Trick or Treat,” he won’t. He will say, much to my horror, “Please give me back my relatives.” People will look at him oddly but that is OK, he won’t notice. He will instead tell everyone just how funny he is and how everyone thinks he is hilarious and witty.

Halloween 2014 — I don’t remember which cloud storage the previous Halloween pictures are in!

He tried his costume on today and looked at me and said “I don’t think this will fit me next year.” His look of horror broke my heart. He didn’t say it but you could hear “What will I do?” linger in the dead silence. I am glad he came to this realization on his own. I am glad he has a year to try to come to terms with this reality. However, I know that the future me will have to deal with the future 14 year old’s inability to really “go with the flow.”

This was the year we lost the brown knit cap … Halloween was almost canceled.

So tonight I am going to treasure the last year of the Hershey bar. I am not even going to tell him not to ask for his relatives back. I might roll my eyes, but I will make sure he doesn’t see it.
Tonight is the end of an era. It may not seem significant to you, but it is to the 13 year old and therefor it is to us. Wish us luck! 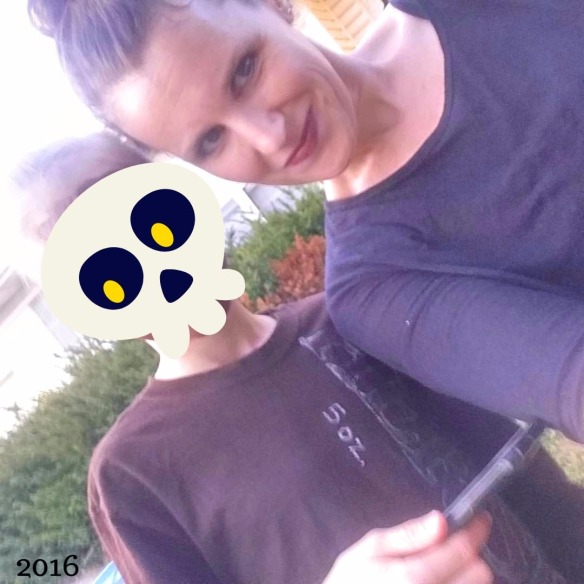 Getting a picture of him is never fun, but he let me do a selfie with him. Not stellar, but I will take it.